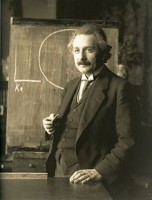 Albert Einstein and law of the photoelectric effect 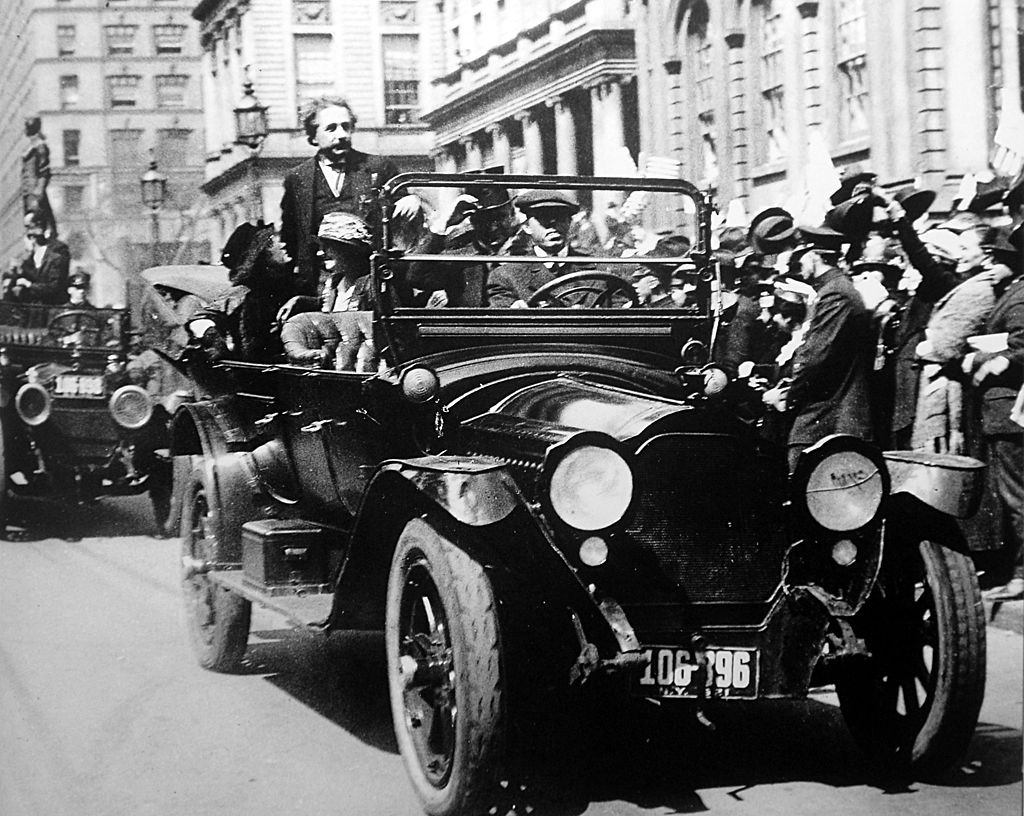 Einstein in New York, 1921, his first visit to the United States

Albert Einstein (14 March 1879 – 18 April 1955) was a German-born theoretical physicist. He developed the general theory of relativity, one of the two pillars of modern physics (alongside quantum mechanics).
Einstein’s work is also known for its influence on the philosophy of science.

Einstein is best known in popular culture for his mass–energy equivalence formula E = mc2 (which has been dubbed “the world’s most famous equation”).
He received the 1921 Nobel Prize in Physics for his “services to theoretical physics”, in particular his discovery of the law of the photoelectric effect, a pivotal step in the evolution of quantum theory.

The photoelectric effect is the observation that many metals emit electrons when light shines upon them. Electrons emitted in this manner can be called photoelectrons. The phenomenon is commonly studied in electronic physics, as well as in fields of chemistry, such as quantum chemistry or electrochemistry.


Einstein’s work predicted that the energy of individual ejected electrons increases linearly with the frequency of the light.

Perhaps surprisingly, the precise relationship had not at that time been tested. By 1905 it was known that the energy of photoelectrons increases with increasing frequency of incident light and is independent of the intensity of the light. However, the manner of the increase was not experimentally determined until 1914 when Robert Andrews Millikan showed that Einstein’s prediction was correct.

The photoelectric effect helped to propel the then-emerging concept of wave–particle duality in the nature of light. Light simultaneously possesses the characteristics of both waves and particles, each being manifested according to the circumstances. The effect was impossible to understand in terms of the classical wave description of light, as the energy of the emitted electrons did not depend on the intensity of the incident radiation. Classical theory predicted that the electrons would ‘gather up’ energy over a period of time, and then be emitted

The Nobel Prize in Physics 1921 was awarded to Albert Einstein “for his services to Theoretical Physics, and especially for his discovery of the law of the photoelectric effect”.

Albert Einstein received his Nobel Prize one year later, in 1922. During the selection process in 1921, the Nobel Committee for Physics decided that none of the year’s nominations met the criteria as outlined in the will of Alfred Nobel. According to the Nobel Foundation’s statutes, the Nobel Prize can in such a case be reserved until the following year, and this statute was then applied. Albert Einstein therefore received his Nobel Prize for 1921 one year later, in 1922.

Lecture delivered to the Nordic Assembly of Naturalists at Gothenburg, July 11, 1923

Fundamental Ideas and Problems of the Theory of Relativity

Prize motivation: “for his services to Theoretical Physics, and especially for his discovery of the law of the photoelectric effect”

Albert Einstein received his Nobel Prize one year later, in 1922.

Question: For what did he receive the Nobel Prize?

Answer: Einstein was rewarded for his many contributions to theoretical physics, and especially for his discovery of the law of the photoelectric effect.

Question: What is the photoelectric effect?

Answer: The photoelectric effect is a phenomenon in which electrons are emitted from the surface of matter (usually metals) when light shines upon it. Einstein explained the effect by proposing that light consists of small particles, or quanta, called photons, which carry energy that is proportional to the frequency of light. The electrons in the matter that absorb the energy of the photon get ejected. These findings were published in 1905 in the paper “On a Heuristic Viewpoint Concerning the Production and Transformation of Light”. Einstein’s observations that the photoelectric effect could only be explained if light behaves like a particle, not a wave, was instrumental in establishing the hypothesis that light can behave both like a wave and a particle.

Question: What are the practical applications of the photoelectric effect?

Answer: The photoelectric effect is very important for our daily life. It is the basis for photosynthesis, which is like a very effective solar cell where sunlight is absorbed by plants to make them grow. The effect also forms the basis for a variety of devices such as photodiodes, which are used in light detection within fibre optics, telecommunications networks, solar cells, imaging and many other applications.

Question: When did he deliver his Nobel Lecture?

Answer: He gave his Nobel Lecture on 11 July 1923 in Gothenburg, Sweden.

Question: What other scientific accomplishments is Albert Einstein known for?

Answer: Albert Einstein is one of the most influential physicists in the 20thcentury. In 1905 Einstein published four landmark papers in physics – on the photoelectric effect, Brownian motion, the special theory of relativity and equivalence of matter and energy (E=mc2). The year 2005 was named the “World Year of Physics” in recognition of the 100th anniversary of Einstein’s publications. Einstein is also well known for his general relativity theory published 1915 that complements his special relativity theory of 1905.

Question: Where did he receive his education?

Question: When was Albert Einstein awarded the Nobel Prize in Physics?

Question: Did he marry and have children?