Watermelons have become synonymous with summer and picnics, and for good reason. Their refreshing quality and sweet taste help to combat the heat and provide a guilt-free, low maintenance dessert. 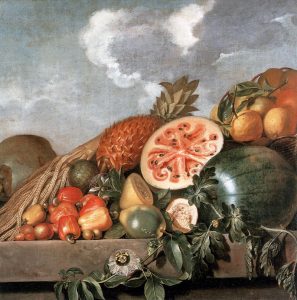 Still Life with Watermelons, Pineapple and Other Fruit by Albert Eckhout, a Dutch painter active in 17th century Brazil

The watermelon is a flowering plant that originated in northeast Africa, where it is found growing wild.

Citrullus colocynthis has sometimes been considered to be a wild ancestor of the watermelon; its native range extends from north and west Africa to west India.

Evidence of the cultivation of both C. lanatus and C. colocynthis in the Nile Valley has been found from the second millennium BC onward, and seeds of both species have been found at Twelfth Dynasty sites and in the tomb of Pharaoh Tutankhamun.

In the 7th century, watermelons were being cultivated in India, and by the 10th century had reached China, which is today the world’s single largest watermelon producer. The Moors introduced the fruit into Spain and there is evidence of it being cultivated in Córdoba in 961 and also in Seville in 1158. It spread northwards through southern Europe, perhaps limited in its advance by summer temperatures being insufficient for good yields. The fruit had begun appearing in European herbals by 1600, and was widely planted in Europe in the 17th century as a minor garden crop.

European colonists and slaves from Africa introduced the watermelon to the New World. Spanish settlers were growing it in Florida in 1576, and it was being grown in Massachusetts by 1629, and by 1650 was being cultivated in Peru, Brazil and Panama, as well as in many British and Dutch colonies.
Around the same time, Native Americans were cultivating the crop in the Mississippi valley and Florida. Watermelons were rapidly accepted in Hawaii and other Pacific islands when they were introduced there by explorers such as Captain James Cook.

The bitter South African melon first collected by Thunberg has become naturalized in semiarid regions of several continents, and is designated as a “pest plant” in parts of Western Australia where they are called pig melon. 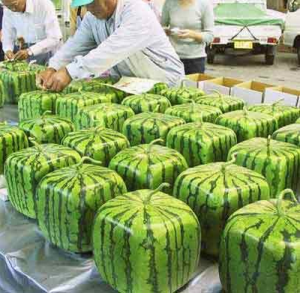 Watermelon (Citrullus lanatus) is a scrambling and trailing vine in the flowering plant family Cucurbitaceae.

The species was long thought to have originated in southern Africa, but this was based on the erroneous synonymization by L. H. Bailey (1930) of a South African species with the cultivated watermelon .

The error became apparent with DNA comparison of material of the cultivated watermelon seen and named by Linnaeus and the holotype of the South African species. There is evidence from seeds in Pharao tombs of watermelon cultivation in Ancient Egypt.

Watermelon is grown in tropical and subtropical areas worldwide for its large edible fruit, also known as a watermelon, which is a special kind of berry with a hard rind and no internal division, botanically called a pepo. The sweet, juicy flesh is usually deep red to pink, with many black seeds, although seedless varieties have been cultivated. The fruit can be eaten raw or pickled and the rind is edible after cooking.

Along with cantaloupe and honeydew, watermelons are a member of the botanical family Cucurbitaceae. There are five common types of watermelon: seeded, seedless, mini (also known as personal), yellow, and orange. 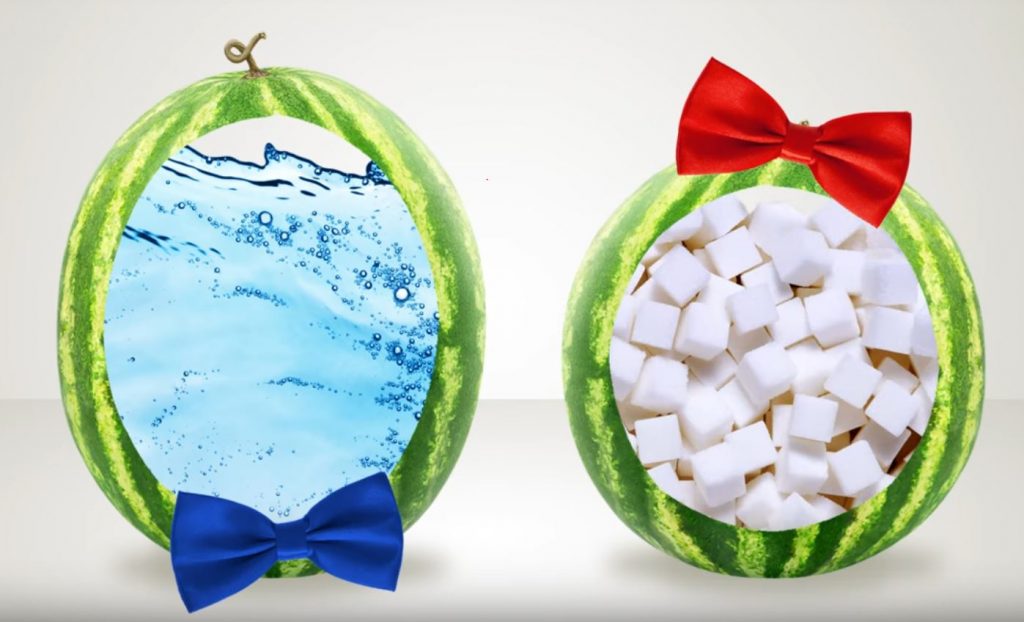 The watermelon has been cultivated for thousands of years, with evidence stretching back to the Ancient Egyptians – who were expert cultivars.
Over 90 percent of a watermelon is water.
According to the Food and Agriculture Organisation of the United Nations (FAO), China is the top producer, with 75 million produced in 2014.

Watermelon is thought to aid conditions including asthma, cancer, and inflammation.

Watermelon is a fruit, and has many of the associated benefits including weight loss and energy levels.

Consuming fruits and vegetables of all kinds has long been associated with a reduced risk of many lifestyle-related health conditions.

Many studies have suggested that increasing consumption of plant foods like watermelon decreases the risk of obesity and overall mortality, diabetes, and heart disease.

Other benefits of the watermelon include promoting a healthy complexion and hair, increased energy, and overall lower weight.

The risks for developing asthma are lower in people who consume a high amount of certain nutrients. One of these nutrients is vitamin C, found in many fruits and vegetables, including watermelon.

A study published by the American Journal of Hypertension found that watermelon extract supplementation improved the health of the circulatory system in obese middle-aged adults with prehypertension or stage 1 hypertension.

Diets rich in lycopene – found in watermelon – may help protect against heart disease.

As an excellent source of antioxidants, including vitamin C, watermelon can help combat the formation of free radicals known to cause cancer. Lycopene intake has been linked with a decreased risk of prostate cancer in several studies.

Watermelon, because of its water and fiber content, helps to prevent constipation and promote regularity for a healthy digestive tract.

Made up of 92 percent water and full of important electrolytes, watermelon is a great snack to have on hand during the hot summer months to prevent dehydration. It can also be frozen in slices for a tasty cold Popsicle-style snack.

Choline – found in watermelon – is a very important and versatile nutrient; it aids our bodies in sleep, muscle movement, learning, and memory. Choline also helps to maintain the structure of cellular membranes, aids in the transmission of nerve impulses, assists in the absorption of fat, and reduces chronic inflammation.

Watermelon and watermelon juice have been shown to reduce muscle soreness and improve recovery time following exercise in athletes. Researchers believe this is likely due to the amino acid L-citrulline contained in watermelon.

Watermelon is great for the skin because it contains vitamin A, a nutrient required for sebum production, which keeps hair moisturized. Vitamin A is also necessary for the growth of all bodily tissues, including skin and hair.

Adequate intake of vitamin C is also needed for the building and maintenance of collagen, which provides structure to skin and hair. Additionally, watermelon contributes to overall hydration, which is vital for healthy looking skin and hair.

Moderate amounts of watermelon present no serious health risk. Excessive consumption can possibly elevate levels of certain vitamins in the body, which may cause complications.

Too much vitamin C, abundant in watermelon, can cause symptoms such as diarrhea or gastrointestinal discomfort. Foods containing lycopene, such as watermelon, may produce these symptoms too. These symptoms are only normally seen when excessive intake is from supplements, not food.

Potassium levels are another consideration, too much might lead to complications such as hyperkalemia which causes an abnormal heart rhythm and can be dangerous. Again, complications are most often due to excessive supplement intake. Overall, watermelon can be consumed safely with little risk.

How to Pick Good Watermelon?

Best Way to Pick a Watermelon:

Good watermelon must be dark green and matte NOT light green and shine.

Watermelon Field Spot
Must be Yellow or even orange NOT White

Inspect the TALE, Tail need to be dried out (brown/gray) NOT Green.