Diversity and Tech: The Stats 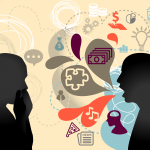 High level conclusions: Cisco and Intel lead the pack with the worst gender diversity, 77 percent (Cisco) and 76 percent (Intel) male. That’s kind of impressive in a bad way, given they’re two of the biggest companies in tech with a staff of 75,000 and 107,600 employees respectively. eBay is the most gender egalitarian, with women representing 42 percent of employees. Pinterest is second runner up, at 40 percent female.

As a baseline for comparison, we also pulled the numbers of the U.S. workforce demographics from the Bureau of Labor Statistics (BLS). The U.S. workforce has a much larger swath of white employees than the tech companies. That’s potentially because the BLS doesn’t consider Hispanic or Latino as an ethnicity (which the tech companies did), and it groups Hispanic and Latino people into other races.
Leadership roles

Leadership-gender-FINAL-NEW
Leadership-diversity-FINAL-NEWLeadership demographic data was a particularly tricky one to decipher, so don’t treat the company comparisons as gospel. Some companies count leadership roles as being only vice presidents, others count as broad a definition as “officials and managers.”

High level conclusions: eBay, Apple, and HP have the most women in leadership roles, although at 28 percent they’re still far from equally weighted. Ebay counted “directors and above” as leaders. HP listed “U.S. officials and managers.” Apple didn’t explain what counted as a “leader” in its blog post, so it could be inflated. Cisco and Pinterest clock as the least egalitarian, with 19 percent of leadership positions filled by women, although Cisco only counts female vice presidents, so that may explain the former’s dismal showing. Pinterest didn’t explain what it counted as “leaders.”

In terms of diversity in leadership roles, HP, Yahoo, and Cisco are the three companies with the most white executives at 80.4 percent, 78 percent, and 76 percent respectively. Yahoo and Cisco define leadership as VPs and above and Facebook didn’t explain what it counted. Apple is by far the most diverse in terms of leadership roles filled with people of different ethnicities, although, once again, without a detailed explanation of who counts as a “leader,” it could have manipulated the definition to make its numbers look good.
Tech roles

Tech companies have both technical and non-technical roles, and the people who occupy the former type of job are notoriously male. The stats prove this out, with Twitter’s technical staff only 10 percent women, and Facebook and Yahoo’s at 15 percent. The other companies fare nearly as badly, with only Pinterest and eBay surpassing the 20 percent mark (at 21 and 24 percent respectively).

gender-comp-sciPart of the problem tech companies face in staffing people of diverse ethnicities and gender is that there aren’t enough women or minorities coming down the pipeline from computer science programs. As a base line of comparison, consider the American computer science graduate data for gender: Sure enough, only 14.5 percent of the people graduating with bachelor’s degrees in CS are women. The tech companies are pretty much on par with the graduates.

In terms of ethnicity breakdown in tech jobs at tech companies, there’s also a heavy emphasis on white and Asian demographics. In technical roles, Apple, once again, has the most diverse staff. The other companies are woefully underrepresented in terms of Hispanic, Black, Native American, multiracial and undeclared.